Following opening remarks from President Ann Marie Krejcarek, Mayor Breed spoke to dozens of student-athletes, coaches and parents looking on from chairs arranged in a sweeping arc in the magnificent City Hall Rotunda. “I’m really honored to be here today to celebrate this team — it is an incredible accomplishment,” she began.

In part of her address to the team, the Mayor said: “Make sure you take a moment to enjoy your experience. Take a moment to take in this extraordinary accomplishment, this celebration that shines a light on your hard work.”

Mayor Breed also credited the school for its Heart to Heart program, which brings together Convent & Stuart Hall students and children from surrounding communities and nearby schools with activities and programs designed to promote friendship and understanding.

Before calling Charley Johnson forward to accept a proclamation declaring April 28 as Stuart Hall High School Basketball Day in San Francisco, the Mayor commended the only head coach in the 22-year history of Stuart Hall, saying, “Thank you for your work and your leadership.”

In his speech, Charley thanked Mayor Breed for hosting the team, adding, “One thing always resonates crystal clear: You love San Francisco. And I want to tell you, I love San Francisco, and nobody is ever taking that from us.”

Charley gave a special shout out to senior Brandon Lum, congratulating him on his Cal-Hi Sports California Division 5 Player of the Year award, and introduced senior Jackson Jung for a speech of his own.

After the ceremony, the team posed for photos on the marble stairs of the Rotunda and received certificates handed out by Tony Farrell, Head of Stuart Hall High School, and Dr. Krejcarek. Later that night, City Hall was lit up in blue and red to celebrate Convent & Stuart Hall.

View photos of the ceremony 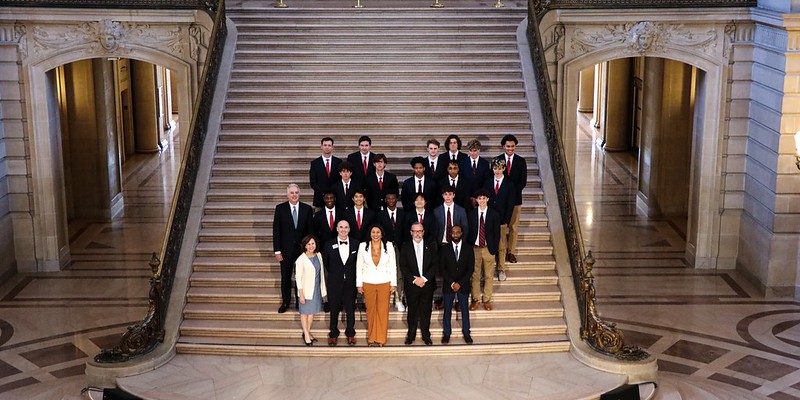